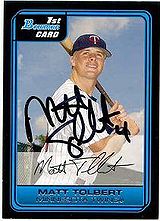 Shortstop Matt Tolbert attended Centreville Academy in Centreville, Mississippi, where he was on the baseball, football, and track and field teams, and graduated in 2000. After four years at the University of Mississippi where he was known much more for his glove than his bat, he was selected by the Minnesota Twins in the 16th round of the 2004 amateur draft. He was signed by scout Mark Quimuyog and made his pro debut that summer with the GCL Twins, for whom he hit .308 with 3 home runs and 18 RBI in 33 games. The next year, 2005, he spent the entire season with the Fort Myers Miracle, for whom he hit .266 with 3 homers and 46 RBIs. 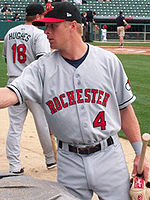 Tolbert began the 2006 season with the AA New Britain Rock Cats before being sent back to Fort Myers in May. With the Miracle he hit .303 with 4 homers in 40 games, and he was promoted back to the Rock Cats in late June. Overall, he hit .258 with 3 home runs and 35 RBI in 72 games for New Britain. He spent the entire 2007 campaign with the AAA Rochester Red Wings and hit .313 in the season's first half to earn a spot in the International League squad in the Triple-A All-Star Game.

Tolbert made the Twins' Opening Day roster in 2008 and made his big league debut in the season's first game against the Los Angeles Angels. On April 11th, he went 3-for-4 against the Kansas City Royals. Overall, he split the season between the majors and AA New Britain, hitting .283 in 41 games for the Twins and .250 in 14 games with the Rock Cats.

Tolbert began the 2009 season with the AAA Rochester Red Wings and was called up by the Twins in early May.

Tolbert spent the entire 2013 season and the first half of 2014 in the Philadelphia Phillies organization before announcing his retirement from playing. On July 30th, the Phillies announced that he would join the coaching staff of the Williamsport Crosscutters of the New York-Penn League (Short Season, A).