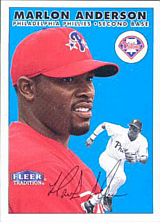 Initially pegged as a potential Philadelphia Phillies building block at second base, Marlon Anderson stuck around the big leagues for 12 seasons primarily on the strength of his pinch-hitting prowess. He hit a pinch home run in his first big league at bat September 8, 1998, off Mel Rojas of the New York Mets.