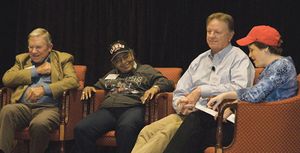 From the left, groundskeeper Murray Cook, Negro Leagues pitcher Mamie "Peanut" Johnson, and Larry Dierker discuss life on the field with Susan Reyburn at the Library of Congress in 2009

Mamie Johnson was the second woman, and first female pitcher, to play in the Negro Leagues. Only one other woman would join the circuit after her, and she was the last survivor of the three. She was signed by the Indianapolis Clowns in 1953, played with the team from 1953 to 1955, and had a 33-8 W-L record, and also batted .276. However, the Negro League were on their last legs at the time, and the quality of play was badly diminished from the circuit's peak. She had previously wanted to play in the All-American Girls Professional Baseball League, but was rejected as that league applied the color barrier, just like Major League Baseball had done until 1947.

She earned the nickname "Peanut" while pitching her first game with the Clowns. Opposing batter Hank Baylis yelled to her, "What makes you think you can strike a batter out? Why, you aren't any larger than a peanut!" She struck him out, and the she was known as "Peanut" from then on.

After her baseball career ended, she was a nurse for 30 years, and also coached youth baseball. When she retired from nursing, she was the manager of a Negro Leagues memorabilia shop. She was also a guest lecturer at a Library of Congress symposium in October 2009.