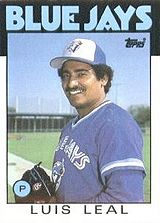 The Toronto Blue Jays signed Luis Leal as an amateur free agent previous to the 1979 season. The young righthander started fast and kept it going as he went 12-2 with the Dunedin Blue Jays. He also spent 1 game with the International League Syracuse Chiefs winning it, to up his record for his first year to 13-2.

He was with Syracuse again in 1980, winning 6 and losing 5 and also got his first chance at the big league hitters, appearing in 13 games, winning 3 and losing 4 while pitching 60 innings for the Blue Jays. On June 2nd, Leal gave up an American League record five consecutive hits to start a game.

He spent the next five seasons, 1981 through 1985 as one of the Blue Jays' main men. The chunky starter from Venezuela showed flashes of brilliance for the Blue Jays within a mediocre career. Leal was erratic, with a five-game winning streak in 1983 that was followed by a four-game losing streak the same season.

Luis had a winning record for the first time when he went 13-12 in 1983. Luis was just getting warmed up and his record went to 13-8, his best major league total ever. Then on August 15, 1984 in a doubleheader with the Cleveland Indians, Leal was allowed to stay in the game to give up a team-record 10 runs (all earned).

Leal fell off his horse again in 1985; in 15 games, he won 3 and lost 6, had a 5.75 ERA and was shipped back to the Syracuse Chiefs where he immediately got back in the saddle and built a 6-2 loss record with a 3.91 ERA for the remainder of the year.

Luis was back with the Chiefs in 1986 but went 3-4 and was traded along with Damaso Garcia to the Atlanta Braves for Craig McMurtry. At the time of his trade, Leal ranked behind only Jim Clancy and Dave Stieb as the Blue Jays' career leader in starts, innings, wins, losses, strikeouts, and walks. The ever-tough Leal gave it one more shot in 1987 with Syracuse, going 2-1, and wound up his professional baseball career with the Knoxville Blue Jays on a 1-0 note.

Leal spent six seasons in the major leagues, winning 51 games and losing 58, appearing in 165 games while pitching 946 innings and had a career 4.14 ERA. His minor league figures showed a 31 win 14 loss record in 89 appearances pitching 436 innings for a 3.47 ERA. Luis was only 30 years old when he left the game.