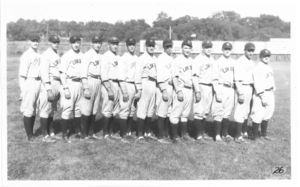 Tecumsehs team, ca. 1924. Fourth from the left is thought to be Charlie Gehringer, who would later play second base for the Detroit Tigers

The London Tecumsehs were the first Canadian team to win a professional baseball title of any type when they became champions of the International Association in its first season in 1877. The International Association was the strongest rival of the National League, established only a year earlier, and some have argued that it should have been considered a major league. The team featured pitcher Fred Goldsmith as its biggest star. Jake Knodell also played for the team.

The Tecumsehs derive their name from Chief Tecumseh (1768-1813) of the Shawnee nation, an ally of the British during the War of 1812 who was killed at the Battle of the Thames which was fought near London, ON.

In 2021, the 1877 Tecumsehs were inducted as a team in the Canadian Baseball Hall of Fame, in recognition of the historic nature of their first championship.

This page is in need of some additional content. Please help the Bullpen by expanding it, or learn how to contribute.
Retrieved from "https://www.baseball-reference.com/bpv/index.php?title=London_Tecumsehs&oldid=1202613"
Categories:
Hidden category: