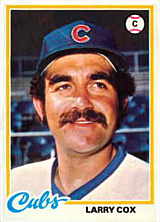 Larry Cox was a valuable reserve catcher for a host of major league teams. Frequently demoted to the minors, Cox always seemed to turn up on a major league roster before season's end. He was a good student of the game and a good handler of pitchers, a valuable man to have down in the bullpen.

After his playing career ended, catcher Cox became a minor league manager and was a coach with the Chicago Cubs in 1988 and 1989. He died of a heart attack while playing racquetball in 1990.