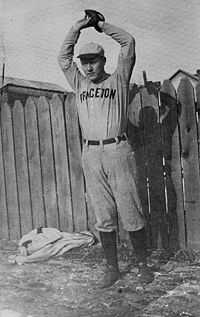 King Lear came out of Princeton University and pitched two seasons in the major leagues. His ERA each year was just a tad higher than the league average.

Tommy Leach, who had broken into baseball in 1898 when King Lear was 7 years old, was still playing baseball with Lear's team when Lear pitched for the Cincinnati Reds in 1915.

Lear pitched every inning of the four "Big Three" games in 1912, beating Yale University twice and Harvard University once.