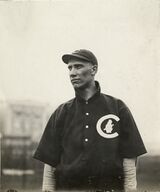 “He is the natural pitcher who, whether he wants to or not, ‘puts something on every ball.’ His fast ball flashes upward and in; his curve breaks like an air-blown ball. He achieves his speed seemingly without an effort, his long arm and fingers giving the ball strange twists, and the speed with which he hurls it causes the air to do the rest.” - Hugh Fullerton, American magazine, 1910

He underwent surgery for a groin tumor in April 1915. Declaring he was fit to play ball, he left the hospital in mid-May, ignoring doctor's orders to rest. He reported to practice, but was feeling dizzy while on the field and was helped back to the clubhouse. The doctor ordered him to go home to Bay City, MI and rest for several months, after which he would be fine to return to work. He was diagnosed with lung cancer later that year and died early in 1916 at 29.