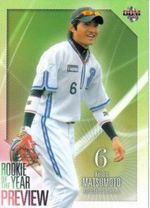 Keijiro Matsumoto was the #3 hitter and center fielder for Japan in the 2008 World University Championship. He hit .439/.439/.732 with 11 runs and 12 RBI in 8 games for the Silver Medalists and was 5-for-5 in steal attempts. He led the tournament in runs (1 more than Micah Gibbs), hits (18, 8 more than the next player), average, RBI and steals. He was second to Hunter Morris in slugging and tied for second in homers (2, 1 behind Morris). He also threw out Tommy Mendonca at home in the 12th inning of the Gold Medal game. Matsumoto lost MVP honors to Blake Smith despite his superior performance.

Matsumoto was a first-round pick of both the Yokohama BayStars and Hanshin Tigers in the 2008 draft; Yokohama won bargaining rights and signed him. Matsumoto began 2009 in Nippon Pro Baseball but was sent down to ni-gun after several weeks.