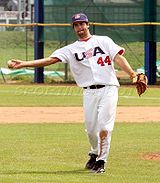 Tommy Mendonca is a former third baseman who is most notable for winning the 2008 College World Series Most Outstanding Player award while a sophomore at Fresno State University. He is the only player from Fresno State University to win that award. Mendonca played for the USA in the 2008 World University Championship (going 4 for 4 in the US's 1-0 win in the Gold Medal game against Japan) and 2008 Haarlem Baseball Week.

Prior to attending FSU, he attended Turlock High School. In 2006, he hit .429 with six home runs.

His uncle, Robert Mendonca, played in the Philadelphia Phillies organization.