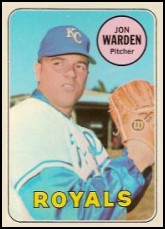 Jon Warden pitched six years in professional baseball, one of them in the majors. His career was derailed by injury and control problems. He was 41-40 in the minors and 4-1 in the majors.

Warden was drafted in the 4th round of the 1966 amateur draft (January phase) by the Detroit Tigers. He debuted that season with the Daytona Beach Islanders that year and went 9-12 with a 3.24 ERA, below league average but just above team average. He led the Florida State League, though in hits allowed (201) and runs allowed (94) and tied for the lead in earned runs given up (72). He did strike out 174 in 200 innings, putting him second in the FSL in Ks behind Lloyd Forroux of Miami.

With the 1967 Rocky Mount Leafs, Jon was a workhorse. He threw a Carolina League-leading 219 innings and they were busy ones as he walked 137 and fanned 196. He threw 21 wild pitches and completed 14 of 30 starts. He was 15-11 with a 2.88 ERA. As it was a pitcher's era, he did not make the top 10 in ERA but he did tie three other pitchers for the league lead in wins. He was one off of the pace in both wild pitches and complete games and tied for the lead in starts.

Warden spent his one season in the majors with the Tigers in 1968. He was the American League's first pitcher to three wins and finished 4-1 with 3 saves and a 3.62 ERA (only a 83 ERA+ in the "Year of the Pitcher") in 28 games for the AL pennant winners. He only pitched once after August 25th and was not used in the post-season.

He was then drafted by the Kansas City Royals in the expansion draft, injured his arm in spring training and never appeared in another major league game. He had a 2-1, 3.66 line for the 1969 High Point-Thomasville Royals and went 6-6 with a 5.23 ERA for the Omaha Royals that season. With Omaha, he walked 80 in 121 IP and he issued 27 free passes in 32 innings for High Point-Thomasville (though he allowed 20 hits there).

On September 2, 1969, Warden was called up to the Kansas City Royals. He spent the rest of the season on the active roster but failed to see any game action.

In 1970, the hurler went 6-10 with a 4.07 ERA for the San Jose Bees. In his final season, he sputtered in three stops, making three relief appearances at each. For the Elmira Royals, he allowed one run in 7 innings. With the Arkansas Travelers of the St. Louis Cardinals system, he was 1-0 with a 7.20 ERA. He also was with the Milwaukee Brewers' Evansville Triplets, where he allowed five runs in two innings.

As of 2007, he serves as Kangaroo Court judge at the Tigers annual Fantasy Camp in Lakeland, FL and one observer called him one of baseball's funniest men.