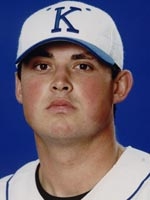 Jon Hooker was a minor league relief pitcher for four seasons from 2001 to 2005. He died in a August 2006 commercial airliner crash.

Hooker joined the Fargo-Moorhead Redhawks of the independent Northern League in 2002. For the Redhawks in 2003 he appeared in 28 games, and finished 13 with a single save and a 3 - 1 record for the league champions. He also had an ERA of 5.46, 61 strikeouts and 29 walks in 64.1 innings.

On June 30, 2004, Hooker was traded to the Joliet JackHammers for first baseman Jason Kinchen and completed an earlier trade between the teams that brought Corey Paul to the Joliet club. At the time he had a 1 - 1 record with a save, 1.77 ERA in 10 relief appearances and 20.1 innings pitched for the Redhawks. In his three seasons with the RedHawks he had a 5-5 record, a 4.28 ERA with four saves in 63 appearances.

Over the rest of the season Hooker went 4 - 2 in 22 games, with a 5.40 ERA in 28.1 innings. On May 23, 2005 he was released by the JackHammers after a single 1.1 inning appearance where he gave up 4 earned runs and two hits. After the season, he retired from baseball. He would attend Eastern Kentucky University, receive a degree and became a parole counselor and social worker.

On the evening of August 26, 2006, Hooker married Scarlett Parsely, a graduate student at Kentucky. On the following morning, the newlyweds were onboard Comair Flight 191 on the first leg of their honeymoon trip to California. The plane crashed on around 6:07 AM on the morning of August 27, 2006, shortly after takeoff from Lexington, Kentucky's Blue Grass Airport enroute to Atlanta's Hartsfield-Jackson International Airport. Both Hooker, his wife, and 47 other passengers and crew were killed as a result (only the plane's co-pilot survived).