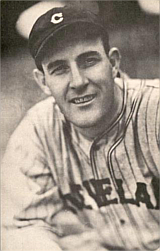 Pitcher Johnny Allen was working as a bellboy in a hotel when he was discovered by New York Yankees scout Paul Krichell. He reached the majors with the Yankees in 1932 and went 17-4, leading the American League with an .810 winning percentage. He won 15 games the next season but after holding out for a raise and suffering a sore arm, he was traded to the Cleveland Indians following the 1935 season. Over his first two seasons, he won his first 16 decisions at home, a feat that was not matched until LaMarr Hoyt in 1982 and was finally bested by José Fernández in 2015.

Allen won 20 games for the Indians in 1936. He won his first 15 decisions the next year, one less than Walter Johnson's AL record, before losing a 1-0 game on an error by Odell Hale. He ended the season with a 15-1 record and a .938 winning percentage, a record at the time (since broken by Elroy Face). Through his first six years in the majors, he went 85-30 and had an impressive .739 winning percentage. Allen won his first 12 decisions in 1938 and was chosen to start the All-Star Game before suffering an injury that sent his career into decline. Over the next six seasons, he had a record close to .500 with the Indians, St. Louis Browns, Brooklyn Dodgers, and New York Giants.

Following his playing days, Allen became an umpire in the Carolina League. He died of a heart attack at age 53.