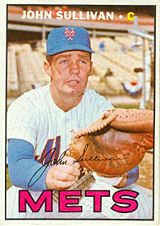 Catcher John Sullivan reached the majors with the Detroit Tigers in 1963 and played in a handful of big league games that year and the next. He did not get his first big league hit, a home run, until 1965.

After his playing days, Sullivan began managing in the minors in the Kansas City Royals organization in 1973. In six seasons as a minor league skipper, his clubs won four league championships. He then was a Royals coach in 1979 and a member of the Atlanta Braves staff the next two seasons, 1980 and 1981, under manager Bobby Cox. In 1982, he followed Cox to the Toronto Blue Jays where he became bullpen coach, a job he held through the 1993 season.