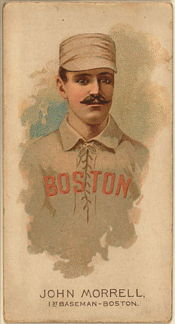 Honest John Morrill, a first baseman, had his best year in 1883 when he was player-manager for the pennant-winning Boston Beaneaters during the last part of the season. As a player, he hit .319 and his slugging percentage of .525 was second in the league. He managed for eight years, with a winning percentage over .500, and played for 15 years, with an Adjusted OPS+ of 111. 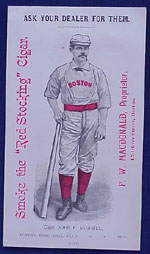 He appeared defensively at every position on the diamond. He was a two-way player of sorts, with 18 pitching appearances spread out over seven seasons. He worked as a National League umpire in 1891 and for one game in 1896.

In 1897 he was part of an old-timers team that took on an Australian team.