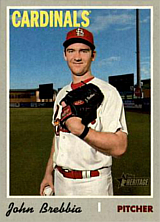 John Brebbia reached the majors at the end of May, 2017, with the St. Louis Cardinals after having been selected from the Arizona Cardinals in the 2015 Rule V Draft. Originally a 30th round draft pick by the New York Yankees in the 2011 amateur draft, he was released in December of 2013, then spent 2014 and 2015 in the independent leagues with the Sioux Falls Canaries and Laredo Lemurs, two teams in the American Association. He signed with the D-Backs at the end of that second season, but never played in their system as the Cards plucked him before he could do so. He spent all of 2016 and the first couple of months of 2017 in the minors in AA and AAA. He was so-so in 2016, going a combined 5-5, 5.03 in 42 games between the Springfield Cardinals and Memphis Redbirds. However, he started 2017 red hot with Memphis, with a 1.69 ERA over his first 15 games, prompting his call-up to the Show.

He made his debut on May 28, 2017 and remained with the Cards for the remainder of the season, with no decisions but a very good ERA of 2.44 in 50 games, all in relief. In 2018, he was 3-3, 3.20 in 45 games with a couple of saves. He struck out 60 batters against just 16 walks in 16 2/3 innings. In spite of this success, he shuffled a couple of times with Memphis, where he was 2-0, 4.61 in 11 games. He spent all of 2019 in the majors, and he had another productive season, going 3-4, 3.59 in 66 games. He again posted excellent strikeout numbers with 87 strikeouts in 72 2/3 innings. The Cardinals won a division title that season and he appeared in the postseason for the first time, pitching 2 scoreless innings in their win over the Atlanta Braves in the Division Series. He didn't do as well when the Cards were swept by the Washington Nationals in the 2019 NLCS, as he allowed two runs in one inning. All of the damage came in Game 3 when he replaced Tyler Webb with his team down 4-0 in the 5th, but allowed back-to-back doubles to Howie Kendrick and Ryan Zimmerman, then started off the 6th by coughing up a gopher ball to Victor Robles as St. Louis went down, 8-1. This turned out to be his final appearance for a long spell, as just after an agreement was reached to re-start the interrupted 2020 pre-season in late June, he had to undergo Tommy John surgery. He had first experienced problems in March, but the forced rest caused by the coronavirus pandemic did not help, forcing him to go under the knife.

On December 21, 2020, he signed a one-year contract with the San Francisco Giants.