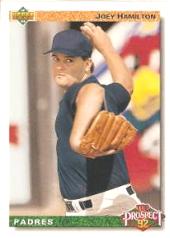 He set a record for futility when he began his career by being hitless in his first 57 at-bats before recording his first hit in 1995. The record was broken by Jon Lester in 2015. Joey hit a lot better after getting the first hit under his belt, as he collected 43 hits in his career, including 8 doubles and 4 homers, for a .127 batting average - poor, but nowhere near that of the weakest-hitting pitchers in history.