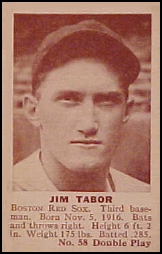 Third baseman Jim Tabor of the Boston Red Sox came to majors as one of baseball's brightest infield prospects. He had been a student at the University of Alabama before signing with the Red Sox. Playing for the Little Rock Travelers in 1937, Tabor hit a robust .295. He also drove in 95 runs. Jim hit his first professional home run in his first exhibition game. It was a grand slam off the Cleveland Indians' Bob Feller.

By August of his second season (1938), Tabor had reached the majors with the Red Sox. In a July 4, 1939 twin bill with the Philadelphia Athletics, Jim hit four home runs. Three of these were in the second game and two of them were grand slams, (one of which was inside the park). On that day, Jim drove in 11 runs.

Tabor was with the team until the end of the 1944 season. He then entered the United States Army in October 1944 to fight in World War II, and was discharged in December 1945.

By 1946, he was back in baseball, but not with the pennant-bound Red Sox. The Red Sox had sold him to the Philadelphia Phillies on January 22nd.

Playing for the lowly Phils, at the age of 29, Tabor should have had some more years to play, but his best years were behind him. His war experience may have taken a toll on his skills as it did other returning vets. Tabor also had a reputation for being a heavy drinker before going into the Army. After two seasons, Jim was consigned to the minors where he continued to play for a number of years.

Before the war, Tabor showed better than average power and speed. He was good enough to take over the third base spot from Pinky Higgins, who had set a record in 1938 with 12 consecutive base hits, and was, at the end of 1938, a lifetime .305 hitter. Rawhide had 1,021 lifetime hits. 324 of these were for extra bases. From 1938 through 1941, Tabor stole 47 bases. Tabor, who took little guff from anyone, threatened Ted Williams while with the Minneapolis Millers after Williams' poor play in left had cost the Millers a game. Another time, he told off hothead Lefty Grove, who had come over to third to give Rawhide some flack.

After his big league career ended, he spent several years playing in the Pacific Coast League. Tabor died of a heart attack at age 36.