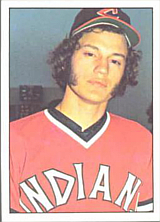 "I told him I wasn't tired. He told me, 'No, but the outfielders sure are.'" - Jim Kern, on what the manager said upon removing him from a game

Although Jim Kern turned out to be an All-Star reliever, he started the first 3 games of his major league career, including a complete game in his debut on September 6, 1974 as a member of the Cleveland Indians against the Baltimore Orioles. He gave up 5 hits, 1 earned run, walked 5 and struck out 4. The only run scored on an RBI double by Rich Coggins. Mike Cuellar outpitched Kern for the complete game shutout.

Kern missed the 1969 season due to military service.