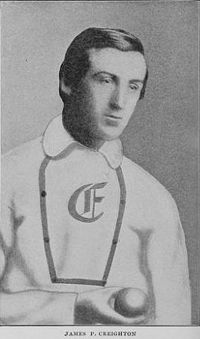 Jim Creighton was the stellar pitcher of his day, even at his young age. He pitched six years before there was any Major League Baseball (1857-1862). He was born in New York City, which was the epicenter of the baseball world at the time, to James and Jane Creighton. He played for the Brooklyn Star (1859); the Brooklyn Niagaras (1859) and the Brooklyn Excelsiors (1859-1862).

Also well known as a cricketer, Creighton was recruited from the Brooklyn Star Club, the Excelsiors being dazzled by his "unhittable delivery." With him pitching almost every game, they won 18 out of 21, holding their opponents to 7.2 runs per game, a record-setting pace for the era. But then tragedy struck, ironically, with him at the plate. He swung so mighty a blow in the manner of the day, with hands separated on the bat, little or no turn of the wrists, and incredible torque applied by the twisting motion of the upper body, that it was reported he ruptured his bladder (later review of the circumstances, aided by modern medical understanding, pointed to a ruptured inguinal hernia).

After four days of hemorrhaging and agony at his home at 307 Henry Street, Jim Creighton passed away at the tender age of 21 years and 6 months, having given his all to baseball in a final epic blast that Roy Hobbs (the cinematic one, that is) might have envied. He, like so many others, is buried at Greenwood Cemetery in Brooklyn, New York with his grave marked by a granite obelisk adorned by a marble baseball, although the oversized baseball that sat on top of his monument has long since disappeared.