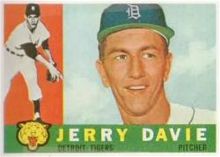 Righthander Jerry Davie was signed by the Detroit Tigers as an amateur free agent before the 1952 season and was assigned to the class D Jamestown Falcons of the PONY League. The 19-year-old started out his baseball career with a fine season, winning 17 games and losing only 3 with a 2.63 ERA.

The young man was then called into the United States military during the Korean War in 1953 and 1954. Upon his return to baseball, he spent the next four seasons working his way up the Detroit organization in the minor leagues. In 1958 he pitched the Charleston Senators to the American Association pennant with a 17-5 record, leading the league in both winning percentage and with a 2.45 ERA.

Jerry was with both the Denver Bears and the Victoria Rosebuds in 1960, went 1 and 3 with a 3.50 ERA and decided to call it a career. He had seven active seasons during his time in pro baseball and his stat sheet shows solid numbers. Jerry appeared in 198 outings, winning 72 and losing 54, pitching 996 innings, allowing 864 base hits and 496 base on balls for a 4.00 ERA.

After baseball Jerry was the director of parks and recreation in nearby Southgate, Michigan and also was a salesman for a vending machine company before retiring to Haines City, FL.