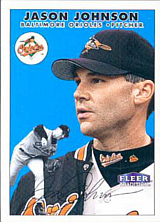 Jason Johnson pitched for the Seibu Lions in 2007, signing with the club in January of 2007 for 350 million yen.

Johnson is a type 1 diabetic and was the first big leaguer to be given permission to wear an insulin pump on the field.