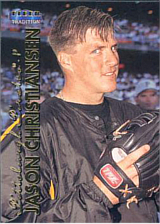 Originally a member of the Pittsburgh Pirates, Jason debuted in 1995, recording his first 6 career saves in 1998, part of a 60-appearance season with a 3-3 record, 2.51 ERA and 71 strikeouts in 64 2/3 innings. Following that strong season, he was transitioned to a LOOGY role, eventually moving twice in successive seasons, to the St. Louis Cardinals in 2000 and the San Francisco Giants in 2001. Injuries cost him a chance to appear with the Giants in the 2002 World Series, but it was Christiansen who caused some injuries of his own a few years later, wrestling with legendary slugger Barry Bonds as part of a heated exchange in 2005 that led the home run king to need knee surgery. By the time his role in the fracas was revealed, Jason had moved to the Anaheim Angels, part of a deal for pitchers Dusty Bergman and "Single A" player Ronnie Ray. His career over after 12 appearances in Halo country, Jason made the news again in 2007 when his name was named in the Mitchell Report for allegedly purchasing Human Growth Hormone.