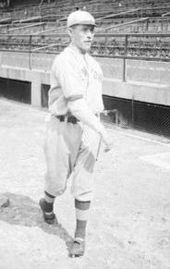 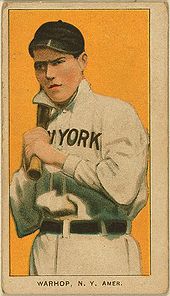 Jack Warhop pitched eight seasons in the majors but is best remembered as the man who gave up Babe Ruth's first two big league homers.

Warhop played for the Freeport Pretzels in 1906 and went 29-7. He had an even better year with the club the next season, going 30-6 with 330 strikeouts and 13 shutouts. In 1908, he was 29-7 for the Williamsport Millionaires before reaching the majors with the New York Highlanders late in the season.

During the 1915 season, his last in the majors, Warhop was taken deep by Boston Red Sox pitcher Babe Ruth for his first two major league home runs, on May 6 and June 2. Warhop also is one of only four pitchers to steal home twice during their big league careers.

After his big league days were over, Warhop returned to the minors. He joined the Bridgeport Bears of the Eastern League as a 42 year old in 1927. Weeks later, in his third start for the team, he pitched a complete 17-inning game, and later in the season, he became possibly the oldest man to pitch and win a complete double-header. With the Bears that year, he went 11-7 with a 2.49 ERA and completed 15 of his 18 starts. He played one more year in the minors before retiring.