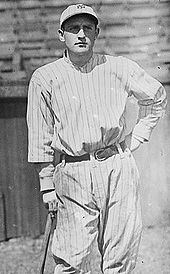 Henry Luther "Hinkey" Haines had one year in the big leagues with the New York Yankees in 1923, and appeared in the 1923 World Series with them, which they won. He also played professional football and was a member of the New York Giants team which in 1927 won its first NFL championship. He is the only athlete to have played on national championship teams in both baseball and football.

While at Penn State, he was part of the team that won 30 straight games in 1920 and 1921. He coached at Gettysburg College the following year.