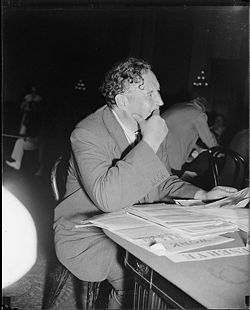 Heywood Broun was the recipient of the 1970 J.G. Taylor Spink Award.

Born in Brooklyn, NY in 1888, Heywood Broun (pronounced broon) began his newspaper career with the New York Morning Telegraph in 1910 after dropping out of Harvard University. He later joined the New York Tribune where he first began covering baseball and the New York Giants. A close friend and checkers-playing partner with Christy Mathewson, Broun left baseball reporting to act as war correspondent for the Tribune during World War I.

In 1921, Broun signed with the Morning World where he began his famed, opinionated, no-holds-barred column titled "It Seems to Me." When his stories weren't shaking up the establishment, he turned to baseball. His fascination with Babe Ruth eventually led to a life-long friendship and it was Broun who led his story about Game Two of the 1923 World Series with the classic line "The Ruth is mighty and shall prevail."

The founder and first president of the American Newspaper Guild, Broun was an unorthodox writer and an opinionated individualist.As New York mayor Fiorello LaGuardia stated: "The forces of reaction did not hate Broun because he was a radical, nor did they dislike him because he was a liberal; but how they feared him because he was truthful!" [1]