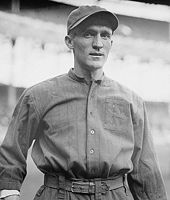 Herbie Moran played exclusively in the outfield during his seven years in the big leagues, spent during the dead-ball era. He was part of the 1914 Miracle Braves, although he spent more than half the season with the 1914 Cincinnati Reds.

Moran was a regular outfielder with the 1912 Brooklyn Dodgers when Casey Stengel came up. Moran in 1912 was the most-used player in both center field and also in right field. Stengel took over center field in 1913 while Moran played right.

His minor league career stretched from 1905-18 and he twice managed in the minors during the 1930's.

His photo and biography were featured in the January 2, 1915 issue of Sporting Life. According to the biography, he played semi-pro ball before coming to the minors in 1907.

". . . he . . . proved an important factor in (the Miracle Braves') amazing capture of the National League championship and World's Championship. . . Being fast and small makes him an excellent lead-off man." - Sporting Life, January 2, 1915