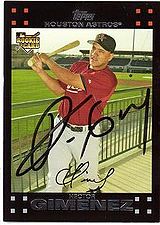 Hector Gimenez was signed by the Houston Astros and scout Andres Reiner in July 1999. He then spent 2000-2001 with Venoco (VSL). He first came to the majors with the Astros in 2006.

Gimenez returned to the major leagues in 2011 after not appearing at that level since his debut season. He hit .143 in 7 at-bats with the Los Angeles Dodgers. He followed that up with appearances for the Chicago White Sox in 2012 and 2013. He received by far the most major league plate appearances in 2013.

As of the winter of 2018-19, he was still playing pro ball in the Venezuelan Winter League.

While there have been many major leaguers named Jimenez, he and Chris Gimenez (through 2019) are the only ones who spell their last name with "G".