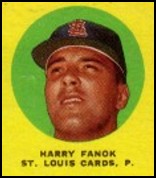 Harry Fanok, "The Flame Thrower", was one of the fastest pitchers of the 1960s. He pitched for the St. Louis Cardinals in 1963 and 1964, getting 35 strikeouts in 33 1/3 innings, about the same ratio of strikeouts per nine innings as Sandy Koufax posted those two years. However, he suffered a shoulder injury while pitching for the Triple-A Atlanta Crackers in August 1963, and he was never the same. After returning to the mound in 1964, the pain in his shoulder caused a mental block that led to a severe hitch in his delivery. He had always tended to be wild, but his control gave out entirely.

Fanok pitched eight seasons in the minors, including a brief comeback after sitting out 1966. The minor league database does not contain complete stats of his strikeouts during that time, but in pitching for Atlanta during 1962 and 1963, his strikeouts per nine innings ratio was higher than 9.0.

Fanok, who had pitched and played other positions in high school, started off in the minors as a third baseman. He was converted to the mound after his first pro season, 1959. He was a pretty good hitter as pitchers go, going 2-for-6 with a double in the majors. He hit around .218 in the minors with some power.

The SABR biography of Harry is largely told in his own words. His father was of Ukrainian background and his mother came from a Polish family.