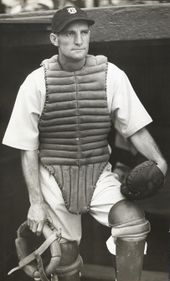 Catcher Glenn Myatt had a long career in the majors, playing sixteen years, although he never had as many as 400 at-bats in any one season. Most of his career was with the Cleveland Indians. His best year was 1924 when he was ninth in the American League in batting and fifth in the league in slugging.

In The New Bill James Historical Abstract, Bill James says that Myatt and Luke Sewell had an unusual platoon for a while where Myatt would play home games while Sewell would play on the road. James states that Myatt had some defensive shortcomings at the time, and eventually Sewell won the regular job.

Myatt played for the Montreal Royals in 1936.