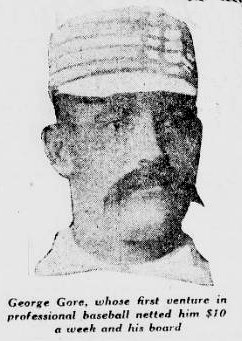 In 1884, he burst past the previous record for walks in a season, 37, and set a new National League record with 61 (Candy Nelson, in the American Association, set a record with 74 that same year). After teammate Ned Williamson drew 75 walks in 1885, Gore blew past that and set a new major league record for walks with 102 in 1886. It then became common for the league leader to have at least 100 walks.

Gore's obituary in the New York Times indicates that he started his professional career in Fall River, MA, at one time a hotbed of baseball, and earned $1,900 for his first major league season. He was listed as a resident of New York, NY in a 1907 newspaper article, see [1], having worked for the city in various positions.

At the time of his death, he was the only outfielder to get five assists in one game. He also had a share of two other records - stealing seven bases in one game and getting five extra-base hits in one game. That last record was set while he played for the Chicago White Stockings, the ancestors of today's Chicago Cubs, on July 9, 1885; the next Cubs player to collect five extra-base hits in a game would be Kris Bryant, in 2016.

Gore is the only major leaguer born in Saccarappa, ME, which became part of Westbrook, ME, a suburb of Portland, ME.