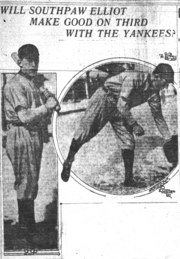 Gene Elliott played five games with the New York Highlanders in 1911, and also had ten seasons in the minors. He played for the McKeesport Tubers for three years before coming to the majors, and years later had seven more seasons in Florida, mostly with the Bradenton Growers. In 1922, his batting average of .329 was the highest for the Orlando Bulldogs. Gene also managed Bradenton in 1924.

His middle name seems to be Burninghaus. Not surprisingly, no other major leaguer through 2019 has had that as a name.

"Elliott was pressed into service (in an exhibition game) for a few innings just to try out his arm. It is coming around nicely. . . The chances are that the Yankee infield for the opening game will line up as follows . . . Johnson at third, but the last-named only temporarily, until Elliott's arm is in shape again. . . Manager Chase (said) . . . 'I have two men, Elliott and Johnson, both of them fast fielders and above all mighty good hitters.' " -Sporting Life, April 15, 1911

"Gene Elliott, who has been enlisted for work in centre field during the emergency (several injured players) has not been in fit form to play, and has been helpless at the bat." - Sporting Life, May 13, 1911

"Little Gene Elliott, the Highlanders' recent third baseman, who made a great hit on the Southern training trip, seems to have dropped out of sight entirely. With the consent of manager Chase, Elliott went to his home in Pennsylvania shortly after the opening of the season. He was to report as soon as his lame arm rounded into form. Nothing has been heard from Elliott since." - Sporting Life, August 5, 1911