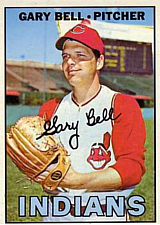 “Gary Bell is nicknamed Ding Dong. Of course. What's interesting about it is that "Ding Dong" is what the guys holler when somebody gets hit in the cup. The cups are metal inserts that fit inside the jock strap, and when a baseball hits one it's called ringing the bell, which rhymes with hell, which is what it hurts like. It's funny, even if you're in the outfield, or in the dugout, no matter how far away, when a guy gets it in the cup you can hear it. Ding Dong." - Jim Bouton, in Ball Four

Gary Bell might have received more media attention in his first year out of baseball than during any of his dozen seasons on American League mounds. Jim Bouton's controversial best seller Ball Four featured Bell prominently, as he was the author's roommate in the early part of the 1969 season with the Seattle Pilots. The name "Ding Dong" wasn't widely known by fans as applying to Gary during his career. Bell's mantra, according to the book: "Smoke 'em inside".

Originally a starter in his first four years with the Cleveland Indians from 1958 to 1961, he won a career-high 16 games in 1959 and 12 in two other years. Gary pounded out four hits himself on September 16, 1958, while pitching against the Washington Senators. But he was a workhorse out of the Cleveland bullpen after being moved there, appearing in 56 to 60 games every year from 1962 to 1965. He also led the American League in victories out of the bullpen with 9 in 1962 and saved a career-high 17 in 1965. That said, he later claimed that he hated relieving "but in those days you had no choice". The Indians were a revolving door of managers in those years, and Bell played for seven different skippers in nine seasons, not something that encouraged a well-thought-out usage of players. In 1966 he returned to the starting rotation and finished with 14 victories. He started out slowly with the Indians in 1967 and was traded to the Boston Red Sox on June 4th, where he played a key role in the Red Sox's "Impossible Dream" pennant with a record of 12-8. He was a 5-2 loser in Game 3 of the World Series against the St. Louis Cardinals, but closed out Game 6 with two scoreless innings to gain a save.

He was drafted by the Seattle Pilots in the expansion draft on October 15, 1968 after a pretty good 1968 season with the BoSox. He shut out the Chicago White Sox in the first ever major league game played in Seattle. On June 8th, he was traded to those White Sox, where he finished his career at 33 with a 121-117 lifetime mark and 51 saves. Despite his successful career, more was expected of him. He had gone 12-10 as a rookie in 1958 and the line about him was "If only he'd been a little meaner... if only he wouldn't be so easy-going, so laid back all the time." He had a reputation for horsing around and never taking himself or anyone else too seriously, and he said himself: "I wouldn't have been a better pitcher if I'd destroyed some furniture in the clubhouse or kicked the dirt when somebody got a hit." That said, he did get in one celebrated fight during his tenure with the Indians with roommate and fellow pitcher Jack Kralick, in August 1965. Kralick took the worst of it, breaking a tooth and needing nine stitches for facial lacerations. The rumored cause of the fight was a dispute over which TV channel to watch.

Gary moved back to San Antonio after his playing career and bounced between various jobs. He was married for a second time in 1978 and founded an athletic supplies company in 1987. Bell had five children from the two marriages. He never attempted to get back into baseball.