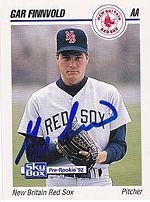 Gar Finnvold made 8 starts for the Boston Red Sox in 1994, going 0-4, 5.94. It was his only major league season. He also played seven years in the minors, including parts of five with the Pawtucket Red Sox.

Gar was born in Boynton Beach, FL and attended high school in Boca Raton, FL. He attended Palm Beach Community College a few years after Dante Bichette and Robby Thompson did, and then attended Florida State University, out of which he was drafted by the pros the same year as Marc Ronan and Matt Dunbar, and a couple years after Deion Sanders.

He spent his entire minor league career in the Boston organization, reaching the AAA level in his second year. Every single minor league appearance was a start.

According to his website, Gar has a real estate firm in Florida. He states that he pitched in the College World Series and was an All-American (if so, he was not a first-team pick) and Academic All-American. [1]