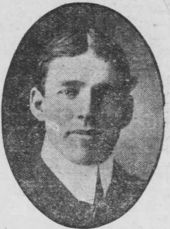 Fred Curtis played a couple games for the New York Highlanders in 1905. He was a first baseman, and the regular first-sacker for the team was Hal Chase.

Curtis had signed as a free agent only four days before his major league debut. After his major league year, he played for several years in the minors in Northern towns such as Winona, Superior and Winnipeg.

The SABR Newsletter Spotlight on the Minors from Fall/Winter 1998 says that Curtis coached either at Toledo or for another Ohio minor league team.