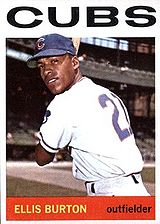 On May 3, 1961, Ellis Burton hit a two-run homer batting left-handed and a grand slam batting right-handed in the 8th inning of a Toronto Maple Leafs game. It was the first time in Organized Baseball history that a switch-hitter had homered from both sides of the plate in the same inning.

Later in his career he twice homered from both sides of the plate in the same game in the majors, a feat done only twice previously at the time by Mickey Mantle and Jim Russell.

Burton was originally signed before the 1955 season by the Pittsburgh Pirates as an amateur free agent. He spent his first season with the class C Phoenix Stars, where he hit .314 and had 14 homers. He spent a couple more seasons in the minors and was drafted by the St. Louis Cardinals in the 1957 minor league draft.

He appeared in 147 games for the Houston Buffaloes and got his first major league action in a late-season look by the Cardinals in 1958, where he appeared in eight games, hitting .233. Ellis had good speed but he had trouble making contact from either side of the plate in later major league trials.

The Cleveland Indians acquired Ellis via the 1962 Rule V Draft and he was with the Chicago Cubs from 1963 to 1965, where he ended his five-season major league effort with a career batting average of .216. He did appear in 215 games, with 556 trips to the plate and collected 120 base hits, of which 17 were home runs.

Ellis went into banking after baseball and in 1974 became manager of the Bank of America in Burbank, CA.