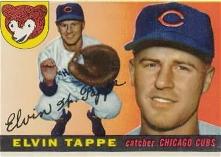 Catcher El Tappe began his pro career in 1947 in the East Texas League. He joined the New York Yankees organization briefly before moving on to the Chicago Cubs farm system. He made his big league debut in 1954 and had several cups of coffee with the Cubs but spent most of his time with the Los Angeles Angels of the Pacific Coast League, where he was an All-Star in 1956.

He later returned to the Cubs as a player/coach and managed the team as part of the club's ill-fated College of Coaches in 1961 and 1962. Tappe played for the Cubs before and after his two stints as a manager, but not during either of them. He went on to spend many years as a Cubs scout. As a player, his remarkably strong arm carried him through parts of six major league seasons.

Tappe had a twin brother, Melvin, who was a minor league pitcher. After retiring as players, they operated a sporting goods store and also worked in television and radio in their hometown of Quincy, Illinois. Tappe died of pancreatic cancer at age 71.