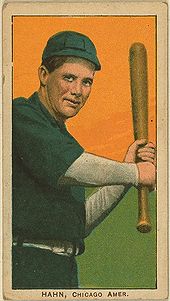 Ed Hahn played six seasons in the major leagues, mostly with the Chicago White Sox, leading the 1907 American League in at-bats. He appeared in the 1906 World Series which the White Sox won. He was the team's lead-off man in each game of the Series.

Hahn was nearly 30 before he made his major league debut in 1905. He had played prior to that for Vicksburg and New Orleans, and after his major league days he played one season for Mansfield and several for Des Moines.

He was the second major leaguer with the last name "Hahn", after Noodles Hahn who was still in the majors when Ed made his debut.