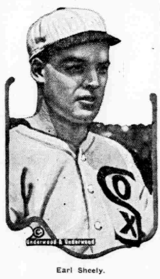 Earl Sheely had a .300 lifetime major league batting average in nine seasons in the big leagues. He spent most of that time with the Chicago White Sox, for whom he was the Opening Day clean-up hitter in 1921 and 1924-26.

Sheely came to the White Sox after the Black Sox Scandal, but the person he replaced at first base, Shano Collins, was not one of those banned. Collins was traded to Boston in early 1921 for Harry Hooper.

After his playing days, Sheely was a scout for the Boston Red Sox (1935-1943), a manager for the Sacramento Solons (1944-1946), and was general manager of the Seattle Rainiers prior to his death (1947-1952). He also served as baseball coach at St. Mary's College of California. In 1943 Sheely was elected to the Pacific Coast League Hall of Fame. He suffered a heart attack and later died of a "heart ailment".