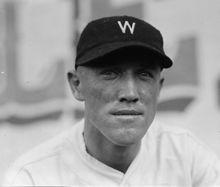 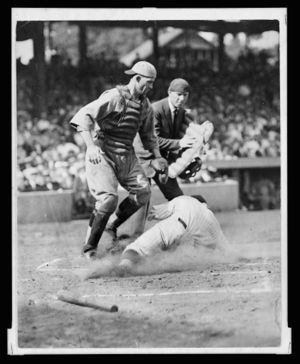 Umpire Dick Nallin is ready to make the call as Washington Senators' Earl McNeely safely slides into home plate at the feet of the Boston Red Sox catcher, George Bischoff, in the 1st inning, Sept. 6 1925

Earl McNeely didn't begin his pro career until after he returned from service in World War I. He played for the Sacramento Senators in 1922-1924 before being sold to the Washington Senators for $35,000 and three players.

The 1924 World Series concluded with McNeely's first (and only) RBI. Through 2007, he is the only rookie ever to end a World Series with an RBI.

McNeely returned to his hometown and took over the managerial reigns in August on 1932. By 1935 he was an owner of the Sacramento Senators. He replaced Kettle Wirts as manager on June 5 of that year in a financial based decision.

After retiring, McNeely lived in Orangevale, CA, where he worked in real estate, investments, and in the farming and cattle business. He was also a member of the Orangevale Volunteer Fire Department and later became a director of the Citrus Heights Fire District. McNeely was a trustee for Orangevale Elementary Schools and American River College.

McNeely was inducted into the Sacramento Athletic Hall of Fame.