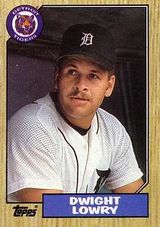 Dwight Lowry made his major league debut as part of the great 1984 Detroit Tigers who won 104 games and won the 1984 World Series. He was a backup catcher who appeared in 32 games that year. He came back in 1986 to hit .307 for the Tigers, the highest average on the team (for anyone with 50+ at-bats) except for Johnny Grubb. He appeared in 13 more games in 1987, when the team again won the pennant. He was released after the season and picked up one week later by the Minnesota Twins. He finished out his major league career in April 1988 with the Twins.

In 1989, Lowry played for the St. Petersburg Pelicans of the Senior Professional Baseball Association. He batted .245 in 43 games for the club. He was a coach for the Fayetteville Generals in 1991-1993 before managing the club in 1994-1996.

He died of a heart attack at age 39 outside his home, one hour after a game. At the time of his death, Lowry was the manager of the Jamestown Jammers.

Lowry was a native North American Indian, from the Lumbee tribe, the same as Gene Locklear, who preceded him to the major leagues by a few years.