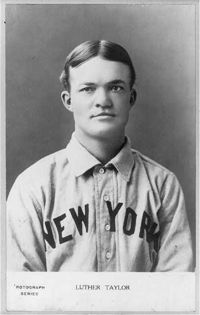 "“In the old days, Hoy and I were called Dummy. It didn’t hurt us. It made us fight harder." - Luther Taylor, quoted here [1]

Deaf pitcher Luther "Dummy" Taylor won 116 major league games and was a vital part of the New York Giants rotation in the early years of the 20th Century.

Born without hearing, Taylor attended the Kansas School for the Deaf, where he was valedictorian. After several years in semipro leagues and the minors, he reached the majors with the Giants in 1900. The following summer, he led the National League with 45 appearances and 27 losses. He jumped to the Cleveland Bronchos of the new American League the next year but returned to New York by May. On May 16th, he played in a game against the Cincinnati Reds, whose lineup included Dummy Hoy; it was the first time that two deaf players faced one another on a big league field.

In 1904, Taylor posted a 21-15 record and a 2.34 ERA as the Giants won the pennant. The next summer, he was 16-9 as New York repeated as NL champs, but due to the presence of Christy Mathewson and Joe McGinnity at the top of the rotation, he did not see action in the World Series. He remained with the Giants through 1908 and played in the minors through 1915.

Taylor was with the Giants long enough that eventually all his teammates learned some sign language in order to communicate with him, and that ability led the team to also expand its use of signs (pitching signs, etc.) between non-deaf players during the games.

After his playing days, Taylor was an umpire and worked at the Illinois School for the Deaf.