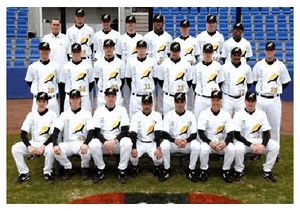 Team photo for the 2009 European Cup

Established in 1959, the Amsterdam Pirates are members of the Hoofdklasse.They play their home games at Sportpark Ookmeer in Amsterdam. The Pirates won league titles in 1987, 1990, 2008, 2011 and 2019. For sponsorship reasons they have previously been known as Tas Detach Pirates Amsterdam, RAP Pirates, Amsterdam Expos and Detach Pirates Amsterdam. In 2008, they became known as L&D Amsterdam (named for an organizational consultancy firm, Learning & Developing Support BV (L&D Support)); they won their third title that year, sweeping the 2008 Holland Series. In 2016 the Pirates won their first European Cup title.

Head Coaches prior to those listed in the chart below[edit]