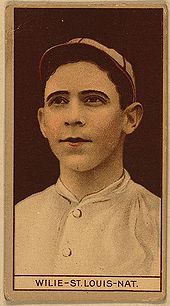 Outfielder Denney Wilie was the first player from Baylor University to come to the majors. He was at Baylor in 1909-11 and made his major league debut in July of 1911 at age 20.

In 1911 Wilie hit only .235 but had an on-base percentage of .361, a useful thing in the dead-ball era. The next year he continued to draw some walks but his batting average and power went down a bit while the team batting average went up.

He played for the Oakland Oaks for several years in the 1920's.