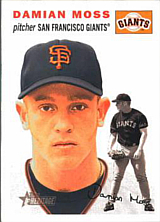 Playing for the Atlanta Braves, Damian Moss tossed seven no-hit innings against the St. Louis Cardinals in 2002. He was pulled before allowing a hit, partly because he had allowed seven walks. Although he allowed no runs, he didn't earn a decision; the Braves won, 2-1, and all of the two teams' runs came in extra innings.

He was traded from the Braves to the San Francisco Giants in December 2002 with Merkin Valdez for Russ Ortiz. At the trading deadline the following season, he was dealt to the Baltimore Orioles with Kurt Ainsworth and minor leaguer Ryan Hannaman for Sidney Ponson.

Moss got Australia's only win in the 2009 World Baseball Classic, tossing 1 2/3 scoreless innings in a 17-7 win over Mexico. He was less effective against Cuba. Replacing Travis Blackley with a 1-1 score and two outs in the 6th, he immediately gave up a homer to Yoenis Céspedes to tie it. After Australia scored 3 in the bottom of the inning, Moss got two outs in the 7th but then walked Hector Olivera Jr. and gave up a RBI double to Michel Enríquez to make it a one-run game; Cuba went on to win by one.