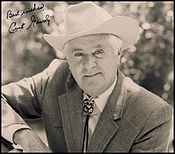 Curt Gowdy began his career as a broadcaster with the New York Yankees in 1949. In 1951, he joined the Boston Red Sox and remained with the club until 1966, when he joined NBC. With NBC, he called 13 World Series and was also a broadcaster for NFL games. He was the main broadcaster for the NBC Game of the Week on Saturday afternoons from 1976 until Joe Garagiola succeeded him in the early 1970s.

"Isn't that cute? He kisses her on the strikes, and she kisses him on the balls." - Curt Gowdy, looking at a couple of spectators

This page is in need of some additional content. Please help the Bullpen by expanding it, or learn how to contribute.
Retrieved from "https://www.baseball-reference.com/bpv/index.php?title=Curt_Gowdy&oldid=1019367"
Categories:
Hidden category: