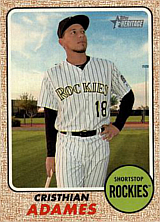 Shortstop Cristhian Adames had a memorable major league debut, as he entered the game of July 29, 2014 between the Colorado Rockies and the Chicago Cubs in a double switch in the 10th inning. The game lasted 6 hours and 27 minutes, the longest by time in both teams' history, and he went 0 for 3. In the 16th inning, he came to the plate with one out and Drew Stubbs on first base, but facing 33-year-old back-up catcher John Baker, who had been pressed into mound duty for the first time in his professional career, he grounded into an inning-ending 6-4-3 double play. Baker then scored the winning run in the bottom of the frame. Adames was immediately sent down after the game so the Rockies could call up pitcher Rob Scahill to help out their own depleted bullpen.

Adames was only 16 when he was signed to his first contract with the Rockies by scouts Rolando Fernandez and Felix Feliz in 2008. He played two seasons for the DSL Rockies before moving to the United States with the Casper Ghosts of the Pioneer League in 2010. He hit .290 in 37 games that first year, but played over 100 games each of the next three seasons, while moving up a level each year. In 2011, he hit .273 in 108 games for the Asheville Tourists of the South Atlantic League, then in 2012 he played 115 games for the Modesto Nuts of the California League, batting .280. 2013 saw him in the AA Texas League, where he hit .267 in 107 games for the Tulsa Drillers. He was named a league All-Star after the season. He started the 2014 season back in Tulsa, hitting .276 in 84 games and making the mid-season All-Star squad, while getting playing time at second and third base in addition to shortstop, in anticipation of having to help the major league club as a utility infielder. On July 19th, he was promoted to the AAA Colorado Springs SkySox and was hitting .273 after 9 games when he got the call to Denver with Rockies starting shortstop Troy Tulowitzki on the disabled list.

Adames had a big year with the Toros del Este in the 2014-15 winter leagues. He won the Dominican League batting title with an average of .353 in 57 games. Adames saw limited action in each of the next three years with the Rox, peaking with 121 appearances (but just 256 plate appearances) in 2016, posting a .218/.304/.302 line. He became a minor league free agent after the 2017 season, spending the entirety of 2018 in the Miami Marlins chain and the first half of 2019 in the Chicago Cubs system. He signed a minor league deal with the San Francisco Giants on July 12, earning a September call up and batting .318/.375/.364 in limited action (22 at bats). Following the season, he was outrighted to the minor leagues.