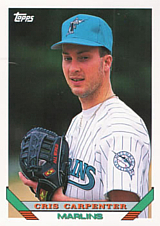 After being a first-round pick of the St. Louis Cardinals in the 1987 amateur draft, Cris Carpenter joined Team USA for the 1987 Pan American Games as the top reliever, allowing Gregg Olson to join the rotation. Carpenter was 6-1 with 5 saves and a team-best 1.37 ERA that summer. During the Pan-Am Games, he was named MVP, not allowing a run during the round robin. He blew up the Gold Medal game against the Cuban national team with five runs allowed in the final two innings to cost the US an upset, but he still was 3-1 with a save and 0.90 ERA on the tournament and allowed only 11 hits in 20 innings while striking out 23. He signed with the Cardinals and scout Vern Benson in September.

A punter at the University of Georgia, Cris raced to the big leagues less a year after his selection, tossing a complete game four-hitter in just his second game, dispatching the Chicago Cubs on May 19, 1988. He never set the world on fire as a big leaguer, enjoying his best season in middle relief for the 1992 squad with a 5-4, 2.97 record in 73 games. His reward was to be left unprotected in the expansion draft, finishing his career with stints with the Florida Marlins, Texas Rangers and Milwaukee Brewers.