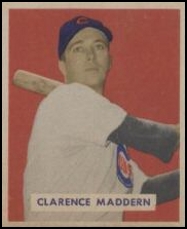 Clarence Maddern played four seasons in the majors, getting most of his major league at-bats with the Chicago Cubs in 1948 where he played almost as many games in left field as Peanuts Lowrey.

Maddern played minor league ball before the World War II. During the war, he was a military policeman with General George S. Patton's Third Army in Europe. He suffered frostbite in his toes during the Battle of the Bulge and had the traumatic experience of having a comrade die in his arms.

At the end of the war he played service ball and then played minor league ball with the Tulsa Oilers in 1946 before coming to the majors. In 1947, he was the clean-up hitter for the Pacific Coast League's Los Angeles Angels and gave them a league title with a dramatic grand slam off Jack Brewer, breaking a scoreless tie in the bottom of the 8th of a one-game playoff with the San Francisco Seals on September 29th.

One main source: Baseball in Wartime.