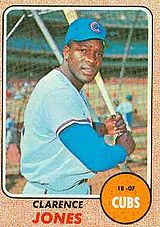 He was the first player to hit 200 HR in the minors and Japan. He was the first American to win a Home Run title in Japan, in 1974. he hit a home run in 5 straight games twice while in Japan, part of 246 round trippers he hit while in the Land of the Rising Sun. He averaged a home run every 12.93 at bats in Japan, playing for Nankai Hawks and Kintetsu Buffaloes. He won 2 home run titles in Japan and was voted to one All-Star team, one Best Nine and received one Diamond Glove Award while in Japan.

His son, Richard T. Jones, is an actor, and was born in Japan while Clarence was playing there.